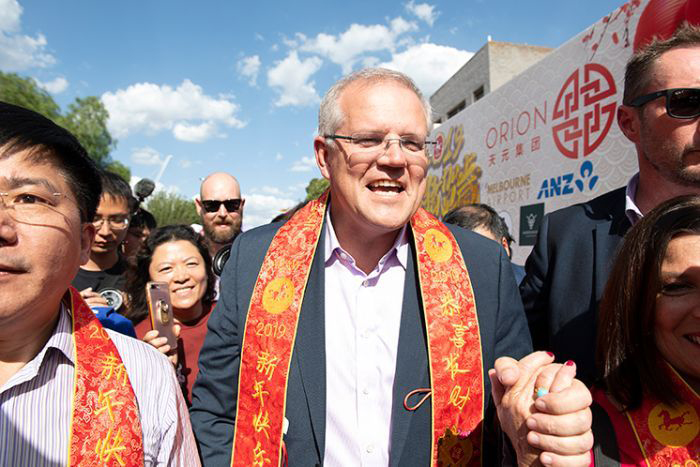 In light of increasing tension between the US and China on trade, security and technology issues, it is in Australia’s interests to increase engagement with not only China but the rest of Asia through both cultural, trade, aid and sporting initiatives.

Prime Minister Morrison’s first post-election trip – taking in the Solomon Islands and Singapore – reflected a focus on regional relationships, although this strategy was already apparent ahead of the election. Toward the end of 2018 the government began reversing the cost-saving measures that were choking our links with Asia and the Pacific nations. It announced $2 billion to support infrastructure in the Pacific and approved $1 billion of new funding for the Export Finance Insurance Corporation. It revived Australia’s offshore broadcasting service.

The prior minister for foreign affairs, Julie Bishop, saw the states of the ASEAN – with over 630 million people – as the heart and voice of Southeast Asia and pivotal to the future of the Indo-Pacific area. ASEAN economies’ growth continues to significantly outpace the global average and the number of middle class families is expected to more than quadruple by 2030 to 161 million.

In March the Morrison government announced the creation of the National Foundation for Australia-China Relations, with Foreign Affairs Minister Payne, describing it as: “a high profile platform for the promotion of Australia-China ties. It will harness efforts of the private sector, peak bodies, NGOs, cultural organisations, state and federal agencies and the Chinese-Australian community to turbo-charge our national effort in engaging China.

“The Government is establishing the new foundation to build on the pioneering work of the Australia-China Council. For more than forty years the Council has been at the forefront of strengthening the Australia-China bilateral relationship,” she said, adding the new body would have substantially higher funding, with chair of the Australia-China Council, Warwick Smith as its inaugural chair. “The new body will move beyond the Council’s current focus on education, culture and the arts, to also promote Australian excellence in areas such as agriculture, infrastructure, health and ageing, and the environment and energy. The Foundation also will provide practical support and expertise to Australian stakeholders developing links and exchanges with counterparts in China.”

Entrepreneurs, and more recently app developers, tend to focus on the US as their primary market – after all, it’s large and speaks English. But the reality is different. Our trading links with Asia have long been more important. In late 2007 China overtook Japan as Australia’s largest trading partner ($175 billion a year). China is now our biggest source of tourists (1.4 million a year). Australia is China’s sixth largest trading partner: 25 per cent of our manufactured goods come from China and more than 28 per cent of our exports go to China. Australia is now home to more than 1.2 million people of Chinese ancestry, and a two-way investment relationship is developing, tying the two nations closer together.

Meanwhile, Japan has overtaken Britain to become Australia’s second largest cumulative foreign investor after the US.

And Prime Minister Morrison told Asia Briefing Liveaudience in November see story here the India Economic Strategy to 2035,authored by the former High Commissioner to India and head of DFAT, Peter Varghese, was “the first step towards a long-term investment that cements India in the front rank of Australia’s partnerships.”

One unusual but realistic barometer of Australia-Asia relations is how Asian comedians see Australia. In April the Lowy Institute took a snapshot at the International Comedy Festival in Melbourne. A telling point, according to author Melissa Conley Tyler, was the extent of talent from the region, which included some 10 comedians from China, Japan, India, Brunei, Singapore and Malaysia. “This is important; for Australians, cultural understanding is vital to build emotional affinity with our region,” she stated, adding the shows demonstrated Asia was open to and connected with Australia, reinforced by a commonality or universality of topics among both Asian and local comedians.

The ‘soft power’ of cultural partnerships often precedes and underpins the trust required in trade relationships. One small example of the burgeoning cultural links between Australia and Asia is Sydney’s 4A Centre for Contemporary Asian Art’s Beijing studio program. Now in its eighth consecutive year, the program offers three Australian artists a month-long residency at the studios of internationally renowned Chinese-Australian artist Shen Shaomin. Artists are mentored by a leading international artist, undertake research for new works, develop professional networks and witness first-hand the changes occurring in China.

Other visual art initiatives, outside the main museums, a rising number of regional galleries taking part in the Sydney Art Fair; Sullivan + Strump opening a Singapore commercial gallery; increasing interaction between art curators in  the region; artist-run initiatives (ARIs) such as Sydney Non Objective holding reciprocal shows with overseas ARIs; and Sydney Artspace’s region-wide initiative 52 Artists 52 Actions. A first of its kind, this year-long online project was driven each week by a different artist responding to social and political issues, culminating with a May-August exhibition documenting the archive of artistic actions.